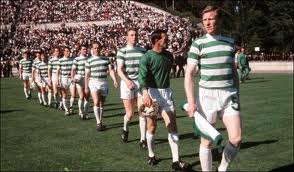 
AS Celtic prepare for Saturday’s pre-season friendly against Inter Milan, supporters will inevitably cast their minds back to that evening 45 years ago when the Nerazzurri were put to the sword by the Lisbon Lions.

The gap between the two sides was in one sense thin, in another as wide as the River Clyde is at Greenock. Despite Celtic’s dominance – and a modern statto analyst would have had a field day, noting in particular Celtic’s 42 attempts on goal (yes, you read that right) to Inter’s mere five – only a one-goal margin clinched the final tie. There never has been as one-sided a final and probably never will be.

Nonetheless, as Celtic, trailing to Sandro Mazzola’s early penalty kick, launched failed assault after failed assault on Inter’s charmed goal, an anxiety crept in that the Bhoys’ dominance in every department wasn’t going to prevail.

This fraying of collective nerves is described in our novel The Road to Lisbon. In those latter scenes in Estadio Nacional, Jock Stein and co-protagonist Tim Lynch, a Celtic supporter who has travelled to Portugal for the match, endure similar agonies from different vantage points.

Yet the sheer drama and unbridled ecstasy of winning the European Cup was no doubt accentuated by the nail-biting that had preceded it. Had Celtic cruised to the 3-1, 4-1 or 5-1 win their play deserved, the affair would have fizzled out. Joyous and seismic the achievement would have remained, but to turn it around late on after such unbearable frustration and tension invoked a sense of historical occasion typical of the club.

The sad passing of Joe McBride this month has meant the dusting down of another stat – 35 goals in 26 appearances (again – yes, you read that right!). That was the striker’s tally during the initial half of that golden season until a persistent knee problem stuck him down on Christmas Eve. This inevitably invites the question: Would McBride have converted more than a few of Celtic’s chances in Lisbon, had he stayed fit and played against Inter? Probably.

Yet video analysis evidences that Celtic were not particularly profligate that day, their scoring exploits undone instead by the width of the woodwork or the fingertips of an inspired Giuliano Sarti.

Celtic were anointed in the sense that they had two other more-than-able forward players who would fill the gaping McBride-shaped void, one of whom would score in the final.

The prolific Willie Wallace had already arrived from Hearts, contrary to the widely held misapprehension that he was bought in to compensate for the loss of McBride immediately after his injury, while Stevie Chalmers, previously barracked by some on the terraces, had been given a sense of direction and confidence by his dynamic new manager, a transformative process that was classic Stein. Chalmers’ latent talents as a predator were ably demonstrated by that stabbed winner in the Lisbon heat. Of course, playing just behind these two was outside-left Bobby Lennox, the club's second all-time top goalscorer.

It is notable, and according to obituaries typical of the man, that McBride was always philosophical about missing out. Of course, he had already played a significant part in Celtic’s wonder year; and it wasn’t all about the European Cup – Celts famously won every tournament they entered and McBride’s contribution was crucial.